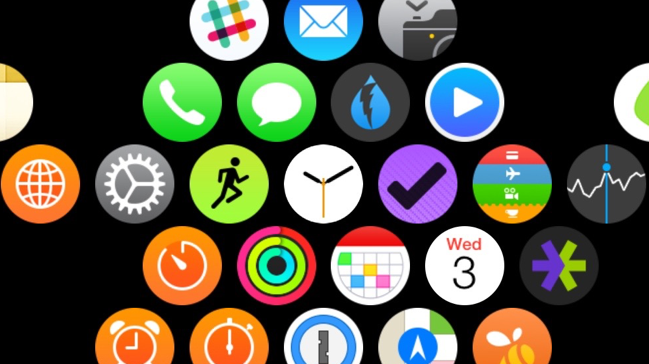 I got an Apple Watch on Monday. Having it for roughly 48 hours, I had a couple of quick impressions. Overall, it’s a first-generation product but is more useful than the first-generation iPad I got.

What Makes It Valuable

While I used my iPhone to lookup the time, having a watch is actually convenient. The little complications are also fun.

The Activity and Workout app are unique Watch features that are not on the iPhone/iPad. The gamification with the Activity rings is motiviating. Instead of just numbers, the activity rings look like achievable goals every day. We’ll see how long I keep it up.

My iPhone 6 Plus is kept on silent during most work hours. However, I leave the vibration on. Unfortunately, if I leave the phone on a table, it vibrates fairly loudly.

With the Watch, I only get the haptic feedback which is nice. I like the idea of long glances where only a general summary shows up first for a notification, and if you leave your wrist raised, you get the actual notification.

I already limited my iPhone’s notifications (mostly communication and financial apps) to being able to make sounds/vibrations. Other apps might be able to leave a notification in the notification center, and a few are only allowed to show a banner (e.g. time-sensitive notifications that don’t really matter if I miss them). Since I limited the notifications, I think I’m not overwhelmed with them on the Watch.

Setting up the App Layout

The App Layout on the iPhone is kind of annoying because it shuffles and auto-rebalances the icon layout.

While the bands are obviously lightweight, the 42mm watch is heavy enough to be noticable, especially since I haven’t worn a watch for a while.

The synchronization has some issues. There can be a delay in synchroinizing the Activity data between the watch and my phone. Also, Exchange meetings are not kept entirely in sync. Apparently, there is a bug where a meeting accepted in OS X Mail does not make it all the way to the Watch calendar (the meeting does show up on the iPhone). If the meeting is accepted on your iPhone or Apple Watch, the meeting shows up correctly.

Also, sometimes the notifications are delayed or non-existent. For instance, the actual text of iMessages sent to my phone number don’t show up sometimes on the Watch but they do on the phone.

The apps are slow to launch but hopefully that will improve with a native SDK.

The display is not large so expecting to read email or other long messages is difficult. Also, on several third-party apps, the touch targets do not seem large enough. Sometimes though even the Apple “back” upper left navigation is not easy to touch quickly.

Haptic Feedback is Not Always Noticable

The haptic feedback is great but sometimes when you’re busy, the feedback can be ignored. So sometimes, I find notifications on the Watch that I don’t recall being notified by touch. Even with the prominent haptic feedback feature enabled.

The Watch is not for Apps like the iPhone

Granted there are many limitations with WatchKit and maybe that will change once a native SDK comes out, but the Apple Watch seems to be focused on non-app behavior. The Clock is the primary app. Glances are the main entrypoint into important apps. Notifications are on the watch as a quick, timely, context-aware, and informative burst of text.

Apps are a “secondary” feature. Launching the app home screen is actually an impediment to doing something quickly on the watch. And if anything, the Watch is about making more effective use of your time for quick actions.

Dictation is Improved But Not Totally, 100% Accurate

Dictation (not Siri) is improved but it is still troublesome enough that a word in every few sentences is incorrect. The issue is compounded because there is no easy way to correct the dictation.

Easily add a reminder or ask for directions. Siri is gradually more useful and functional.

Calibrating the Watch for Workouts

I took a 30 minute walk outside with my phone. It helps calibrate the Watch, so when you don’t have your iPhone, it should estimate the distance fairly accurately. I hope this is true. Running with an iPhone 6 Plus is not appealing.

Force Touch is not Long Press

Many times, I’ve caught myself doing a long press instead of a more forceful press. Only the forceful press will result in the hidden menus in many apps. I’m not sure I like hiding functionality behind the force touch, but I’m not sure that there was a better solution.

Watch Apps I Use

Ultimately, the value for the Watch for me is two-fold.

First, it is useful for performing quick actions in response to notifications or making quick decisions based in the glances.

Second, it is valuable as an activity tracker. Anything to help my health is a good thing.

I don’t recommend most people get the first generation but there are many future applications of the Watch (as an identity, as a key to other devices/cars, as a small storage of preferences, etc.) that will be potentially compelling in the near future.